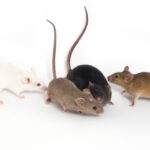 A team led by researchers at IMPC member Institute UC Davis have used IMPC data to identify novel genes associated with oculocutaneous syndromes in gene targeted ‘knockout’ mice, in research that is potentially relevant to human conditions such as albinism and phakomatoses.

Oculocutaneous conditions refer to those affecting the eyes and skin, with most of these being caused by errors in single genes. Albinism is the most well-known disorder that results in abnormalities in both eyes and skin and results from a reduction or lack of the pigment melanin, affecting around 1 in 20,000 individuals in Europe and America. The severity of loss of melanin is variable amongst albino individuals, with this depending on the genetic defect that is responsible. In addition to lighter skin, hair and eyes, eyesight problems can persist throughout an individual with albinism’s lifetime.

The research team at UC Davis led by Ala Moshiri, as well as international colleagues, used the IMPC database to search for genes that caused skin, hair or pigmentation (cutaneous) defects, identifying 307 in total with 226 being previously unknown associations. The 307 genes affecting skin, hair or pigmentation were then searched in the IMPC database for co-existing eye (ocular) abnormalities. This resulted in a set of 52 genes affecting both skin and the eyes, 35 out of these 52 genes are novel findings. “I expect the majority of these genes to cause similar problems in humans”, Moshiri said.

The mouse is an essential model system

The analysis of genetic variants in mice has provided profound insights into the function of human genes. Despite their many visual differences, mice are genetically very similar to humans. The IMPC is systematically ‘knocking out’ or removing every gene in the mouse genome, (around 20,000 genes) one at a time, and examining the effects that this has on the mouse’s biological systems. This can be a key starting point in discovering genes associated with human disease. So far, over 6000 genes have been completed by the project. All of the IMPC’s data is freely available online.

the potential to lead to new therapeutic targets

Moshiri states that the data found by his team “may be of interest to clinicians, especially for patients with no known genetic cause for their condition”. If the novel genes discovered in the study do prove to be relevant for human conditions such as albinism, then they may be a starting point in understanding more about the molecular pathways behind the condition, with the potential to lead to new therapeutic targets.