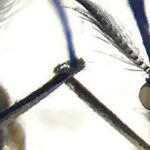 A technology designed to improve CRISPR-Cas9 gene editing in mosquitoes and other arthropods succeeds with a high degree of efficiency, while eliminating the need for difficult microinjection of genetic material, according to researchers.

These results could pave the way for scientists examining a wide range of arthropods — and even some vertebrates — to more easily manipulate gene expression for fundamental research and practical applications such as control of vector-borne diseases like Zika virus and malaria, elimination of agricultural insect pests, and potentially gene therapy for human and animal health.

Current approaches in arthropods rely on delivering the gene-editing Cas9 directly to eggs by embryonic microinjection, a difficult and inefficient process that works in only a small number of species, noted Jason Rasgon, professor of entomology and disease epidemiology, Penn State College of Agricultural Sciences.

“In addition, microinjection can damage the eggs, and it requires expensive equipment and training to implement,” he said. “These restrictions dramatically limit the use of CRISPR-Cas9 technology across diverse species.”

To address these limitations, Rasgon’s lab developed ReMOT Control — Receptor-Mediated Ovary Transduction of Cargo — a method the researchers say can deliver Cas9 cargo to a targeted portion of the genome by easy injection into the blood of female arthropods, where it can be introduced into the developing eggs via receptors in the ovary.

Rasgon explained that during ovary and egg maturation, mosquitoes and other arthropods synthesize yolk proteins, which are secreted into the blood and taken up into the ovaries. The team hypothesized that molecules derived from these yolk proteins could be fused to Cas9 cargo and delivered into the egg at levels necessary to achieve genome editing in the embryo, bypassing the need for embryonic microinjection.

In the process of testing this hypothesis in Aedes aegypti, a mosquito that can spread pathogens such as dengue, chikungunya, Zika, and yellow fever viruses, the team identified a peptide known as P2C, a ligand that is recognized by ovarian receptors and functions in five other mosquito species as well.

To visually show that P2C could achieve uptake in the ovary, the researchers injected the peptide, infused with green fluorescent protein, into mosquitoes. They subsequently found fluorescence in more than 98 percent of primary oocytes.

For gene-editing experiments, the scientists targeted a gene that, when knocked out, results in white eye color rather than dark, providing a visible phenotype to aid in screening. They found that P2C, when bonded with the Cas9 enzyme, was able to deliver the gene-editing cargo to the ovary, where the desired mutation was achieved at a high rate of efficiency, resulting in genetically modified offspring.

The results of the study, published recently in Nature Communications, show that compared to embryo injection, gene editing by ReMOT Control is efficient and technically much easier to accomplish, according to Rasgon.

“Whereas the microinjection apparatus can cost thousands of dollars and require extensive training to use, the equipment for ReMOT Control injections costs approximately $2, and the technique can be learned in less than an hour,” he said.

“The lower cost and ease of adult injections makes this method a substantial improvement over existing embryo-injection techniques, putting gene-editing capability into the reach of nonspecialist laboratories and potentially revolutionizing the broad application of functional arthropod genetics.”