Researchers reconstruct the genome of the ‘first animal’ 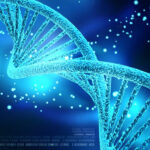 Humans and mice share approximately 98% of genes, and have similar physiology and anatomy. This is because we share a relatively recent common ancestor, around 80 million-years-ago. In contrast, the ancestor of all animals lived over 500 million-years-ago. As genomic data becomes available for more animal species a detailed family tree can be created, allowing novel insight into the genomes of long extinct species. In the guest post below Jordi Paps summarises recent research that attempts to reconstruct the genome of the ‘first animal’ by using the genomic data available on living animals.

By Jordi Paps, University of Essex

The first animals emerged on Earth at least 541m years ago, according to the fossil record. What they looked like is the subject of an ongoing debate, but they’re traditionally thought to have been similar to sponges.

Like today’s animals, they were made up of many, many different cells doing different jobs, programmed by thousands of different genes. But where did all these genes come from? Was the emergence of animals a small step in evolution, or did it represent a big leap in the DNA that carries the instructions for life?

To answer these questions and more, my colleague and I have reconstructed the set of genetic instructions (a minimal genome) present in the last common ancestor of all animals. By comparing this ancestral animal genome to those of other ancient lifeforms, we’ve shown that the emergence of animals involved a lot of very novel changes in DNA. What’s more, some of these changes were so essential to the biology of animals that they are still found in most modern animals after more than 500m years of independent evolution. In fact, most of our own genes are descended from this “first animal”.

Previous research on lifeforms that are closely related to animals – single-celled organisms such as choanoflagellates, filastereans and ichthyosporeans – has shown they share many genes with their animal cousins. This means that these genes are older than animals themselves and date back to some common ancestor of all these creatures. So the recycling of old genes into new functions, a kind of genome tinkering, must have been an important force in the origin of animals.

But Professor Peter Holland and I wanted to find out which new genes emerged when animals evolved. We used sophisticated computer programs to compare 1.5m proteins (the molecules that genes contain the instructions for) across 62 living genomes, making a total of 2.25 trillion comparisons to find out which genes are shared between different organisms today.

We then created a computer program that could combine this information with the evolutionary relationships of the animals to reconstruct which genes were present in the last common ancestor of all animals. The results don’t represent the ancestor’s full genome, as many genes and other genetic information will no longer exist in today’s animals. But using evolutionary trees to infer what happened in the past in this way is one of the most powerful applications of evolutionary biology, as close as we can come to travelling back in time.

Our results suggest the genomes of the first animals were surprisingly similar to those of modern ones, containing the same proportions of biological functions. Around 55% of modern human genes descend from genes found in the last common ancestor of all animals, meaning the other 45% evolved later.

By applying the same techniques to the genomes of modern relatives of animals,
we also reconstructed the genome of even older ancestral organisms. We found that the first animal genome was in many ways very similar to the genomes of these unicellular ancestors.

Finally, we looked at those novel genes from the first animal that are still found in most of the modern animals we studied. Natural selection should mean that animals keep genes with essential biological functions as the species evolve. We found 25 groups of such genes that had been kept in this way, five times more genes than in other, older, ancestors. Most of them have never been associated with the origin of animals before.

Our research shows that both new genes and the recycling of old genes were important in the evolution of animals. But these results raise even more questions. Were novel genes also important in the rise of other types of large multicellular lifeforms such as plants or fungi? What was behind the explosion of novel genes that drove the evolution of animals? Did it happen faster than in other groups or did animal ancestors take a long time to accumulate all the new genes? Answering those questions will require more and better genome data (or improved time-travelling capabilities).

This article was originally published on The Conversation. Read the original article.