A fovea like representation of space in mouse visual cortex 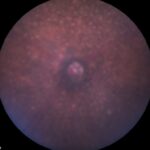 The human retina has a small region called the ‘fovea’ in which all the cone photoreceptors are packed closely together. The fovea provides by far the highest spatial resolution of the retina and we use this region of the retina for all our daytime detailed vision (e.g. reading, recognizing faces). Humans and other primates move their eyes around 3 times per second to point their foveas at interesting locations in the visual world. We essentially build-up a detailed view of the world by ‘scanning’ it with our foveas.

Recently interest in mouse vision has exploded as scientists put to use the sophisticated genetic tools that are available in mice to try to understand vision. The kind of rapid eye-movement scanning found in primates is largely absent from mice. The mouse retina doesn’t have a fovea and is thought to be uniformly sensitive to light. The question then arises whether mice have any spatial biases in their vision – do they have a ‘hot-spot’ in which vision is more detailed, as we do?

We addressed this question by mapping the responses of the visual cortex of mice to visual images. We used a mouse genetic line in which a fluorescent calcium indicator (GCaMP) is present in all neurons in cortex. GCaMP increases in fluorescence when cells become active, allowing us to map out which parts of the brain respond to different regions of the visual world under a microscope. To measure the resolution of vision we measured the ‘population receptive field’ or pRF at different points in the brain. The size of the pRF tells us how accurate the representation of the visual world is; brain regions with large pRFs have only a coarse representation of space, whereas regions with small pRFs have a very detailed view. Surprisingly we found that mouse visual cortex contains a region in which the pRFs are 50% smaller than the rest of the brain. In this region brain cells respond to more closely packed parts of the visual world and can therefore build up a more detailed picture of the world. This region responded to visual stimuli placed directly in front of the mouse and slightly above it, suggesting that mice, like primates, also have a visual hot-spot that they could use to see the world in more detail. This result provides more support for the use of the mouse as a model of human vision.