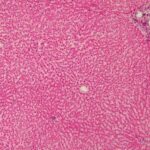 A team of researchers at the Harvard T. H. Chan School of Public Health has illuminated a critical player in cholesterol metabolism that acts as a molecular guardian in cells to help maintain cholesterol levels within a safe, narrow range. Known as Nrf1, it both senses and responds to excess cholesterol, and could represent a potential new therapeutic target in a multitude of diseases where cholesterol metabolism is disrupted.

The study is published in the journal Cell. To produce mice deficient in Nrf1 or Nrf2, the research used alleles from the International Mouse Phenotyping Consortium.

“We’ve uncovered a key missing piece in our understanding of how cells can precisely control their cholesterol levels,” said senior author Gökhan S. Hotamisligil, J.S. Simmons Professor of Genetics and Metabolism and head of the Sabri Ülker Center for Nutrient, Genetic, and Metabolic Research at Harvard Chan School. “That piece forms part of a molecular yin-yang that is critical for keeping cholesterol levels in proper balance and ensuring proper cellular function.”

It has been accepted for decades that high cholesterol in the blood can set the stage for cardiovascular disease and other significant health problems. But elevated cholesterol is even more dangerous at the cellular level, leading to toxicity, inflammation, and eventually cell death. “The cell must guard against any rise in cholesterol — it cannot tolerate levels that are too high or too low,” said Hotamisligil. While there are well known cellular factors that send and receive signals when cholesterol is in short supply (orchestrated by a protein called SREBP2), it has been unclear how cells handle some crucial aspects of the converse problem of too much cholesterol.

To explore the mechanisms that defend cells against cholesterol, first author Scott Widenmaier, research fellow in the Department of Genetic and Complex Diseases and Sabri Ülker Center, and colleagues focused their attention on an area of the cell known as the endoplasmic reticulum or ER, which is surrounded by a membrane notoriously low in cholesterol — lower, in fact, than any other cellular membrane. “This would be a particularly vulnerable place in the cell, where a small increase in cholesterol would make a significant impact,” explained Hotamisligil. As an intracellular structure, the ER requires fluidity, and adding more cholesterol to its membrane makes it more brittle.

Based on their assumption, the scientists set out to find molecules that reside in the ER membrane and that might play a role in detecting or responding to cellular cholesterol levels; they homed in on a handful of likely suspects. In initial experiments, Nrf1 protein stood out because it responds to cholesterol — when cholesterol is added to cells, the levels of Nrf1 increase, indicating that the protein can react to high cholesterol. And when Nrf1 function is disrupted in mice, the liver becomes dramatically enlarged and overrun with excess cholesterol, suggesting that it normally acts to protect the liver from cholesterol accumulation.

To dig more deeply into Nrf1’s protective role in cholesterol metabolism, the researchers set out to determine how it works at the molecular level. They discovered that Nrf1 has the capacity to bind to cholesterol directly, and pinpointed specific regions of the protein that mediate this binding. Moreover, the binding of cholesterol triggers a cascade of molecular events that suppress inflammation and promote cholesterol removal from the cell.

Taken together, these findings highlight a novel program for responding to high cholesterol in the cell that operates alongside other molecular components that guard against low cholesterol.

“This discovery really teaches us a lot about how cells maintain cholesterol homeostasis,” said Hotamisligil. “Now, we demonstrate that there is a molecular yin-yang– formed by NRF1 and SREBP2 — that together keep cellular cholesterol within a safe, narrow range. That’s an exciting finding that could have broad, new therapeutic applications.”

Research article: NRF1 Is an ER Membrane Sensor that Is Central to Cholesterol Homeostasis