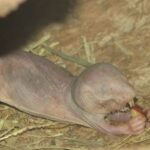 Dr Martin Bens, the corresponding author said: “Our results indicate that when naked mole-rats mature into breeders, it changes their aging rates, meaning that breeders are able to live longer than non-breeders. This is surprising, as evidence from other species suggest that reproduction, which ensures the survival of the species as a whole, reduces the lifespan of the individual. In naked mole-rats reproduction appears to prolong the breeders’ lifespan. This goes against the common expectation that mammals either invest resources in a long life or in reproduction.”

The researchers analyzed the transcriptomes – the sum of all transcribed genes – for tissue samples taken from a range of organs, including heart, liver, and gonads. They compared the transcriptomes of naked mole-rat breeders to that of non-breeders, as well as to breeding and non-breeding guinea pigs, which are close relatives of the naked mole-rat but have a shorter lifespan.

When the authors separated non-breeding naked mole-rats from colonies and paired them with naked mole-rats of the opposite sex, the workers transitioned into breeders. The transition was accompanied by physical and behavioral changes that differed between males and females – the animals became sexually dimorphic. Sexual maturation was also associated with a change in gene expression levels linked to extended life and health span.

Dr Bens said: “Deeper investigations of naked mole-rat transcriptome data can help us understand how sexual maturation is regulated. This could potentially help us better understand sexual maturation in humans, where the onset of puberty varies between individuals and is influenced by a variety of factors such as stress and nutrition. Variations in puberty onset have implications for the risk for diseases such as breast cancer or cardiovascular diseases. Our data may help identify targets to mitigate these variations.”

Alessandro Ori, the corresponding author of the study said: “We found that naked mole-rat livers have a unique expression pattern of mitochondrial proteins that result in distinct metabolic features of their mitochondria, including an increased capacity to utilize fatty acids. We were also able to show that similar molecular networks are affected during aging in both naked mole-rats and humans, which suggests that there may be a direct link between these networks and the longevity of these species, both of which would be expected to have much shorter lives based on their body mass.”